Imagine, if you will, that it’s your birthday, the kids are at school and your husband has the day off. He asks you what you’d like to do. Well, it’s cold outside but the sun is shining and so you decide that it would be lovely to have a walk on the beach, followed by tea and cakes at a beachside café. 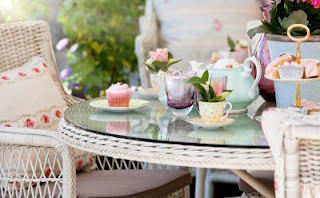 Now imagine that you’ve had the long walk and have arrived at said café. There are a handful of people inside sipping lattes. A waitress guides you across to a table by the window with a perfect, uninterrupted view of the ocean. You shed your coats and hats and gloves and you sit.
‘What can I get you?’ the waitress asks.
‘Two teas, please,’ your husband says. ‘And what cakes do you have?’
‘The cakes don’t come out until three o’clock,’ the waitress replies.

You look at the waitress, wondering if you’ve misheard. And then you look at your husband.
‘Three o’clock?’ your husband says to the waitress.
‘Yes,’ replies the waitress. ‘And it’s only . . .’ She consults her watch, ‘. . . half past two.’
You continue to stare at the waitress, waiting for her to crack a smile and tell you she’s joking. But after five long seconds you realise, no, she’s serious. Sorry, what? The cakes don’t come out until three o’clock? Is this some kind of new EU initiative? Do the chocolate éclairs have this stipulated somewhere in a special pastries contract? Does the lemon drizzle cake think it’s Mariah Carey perhaps?
‘You can have your tea now,’ the waitress says. ‘And I can bring you some cake at three.’
‘Where are the cakes?’ your husband asks, looking around. You too begin to scan the room, hoping to spot a rogue piece of pecan pie and then you’d be able to say, ‘Aha! There! A cake has been spotted next to the coffee machine. I’ll have that one.’ But alas, there is not a slice to be seen.
‘The cakes are in the fridge,’ she replies.
Your husband smiles at her. A nice smile. Not patronising or forced. A genuine, lovely smile. One that you would never be able to pull off in such a time of stress and anxiety. ‘The thing is,’ he says, ‘it’s my wife’s birthday and we’ve come to your café for tea and cakes, but we have to leave quite soon to pick up the kids from school. So would it be at all possible for you to sneak us a slice from the fridge a little bit early. No one need know.’ He grins a cheeky grin to seal the deal.
She frowns. ‘No,’ she says. ‘Not until three.’ 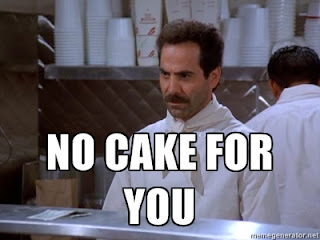 ‘So would you like tea for two now?’ she says, ‘And I’ll bring you the cake later, at three?’
You check the time on your phone. It’s 2.38pm. You want to swear at the waitress, but instead you say, ‘Thank you, but I’d like the tea at the same time as the cake if that’s okay. Can we wait until three and have them both together?’
She thinks for a moment before arriving at her decision. ‘Yes,’ she says. ‘That should be okay.’
The waitress walks off, presumably to check on the cakes and see if they’re happy in the fridge. You smile at your husband and you both spend the next fifteen minutes gazing out at the beautiful sapphire sea and pondering on the peculiarities of cake timetables. You know you’ll have to wolf down the cake and knock back the tea in super-quick time if you’re to get to school on time to pick up the kids, but that’s okay;  this is England where 'customer service' has a myriad of definitions.
At 2.55pm the waitress returns. Oh good she’s early, you think; now you’ll have a little extra time. She leans forward with a conspiratorial smile and says:
‘The cakes will be coming out in five minutes.’