Today I’m thrilled to welcome James Hutchings to the blog.

James lives in Melbourne, Australia. He fights crime as Poetic Justice, but his day job is acting. You might know him by his stage-name 'Brad Pitt.' He specializes in short fantasy fiction. His work has appeared in Daily Science Fiction, fiction365 and Enchanted Conversation among other markets.


His latest collection: The New Death and others, sounds intriguing: 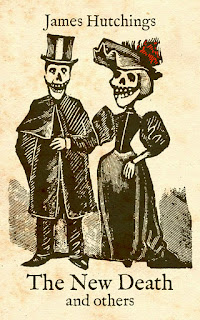 Death gets a roommate...

44 stories and 19 poems. There's a thin line between genius and insanity, and James Hutchings has just crossed it - but from which direction?

Q: What will readers like about your book?
People have said that they like the humour. They've also said that the city of Telelee, which appears in a few stories, is interesting. I also think it stands apart from a lot of fantasy simply because it isn't based on the common template of huge novels about epic quests.

Q: What inspired you to write it?
Some ideas just pop into my head, without me knowing where the idea comes from. Other ideas come from experiences in my life. For example a while ago I found three injured birds in the space of a few weeks. I took all of them to the local vet. As I was carrying one of them, I thought that the woman at reception might wonder where I was finding all these injured birds, and that was the inspiration for my story Lost, Feral or Stray. I've written a lot about cats, based on having been a cat owner.

Of course other fiction is a big inspiration. In some cases it's obvious. I've done poems directly based on stories by HP Lovecraft and other writers for example. In other cases it's more subtle: for example the city of Teleleli or Telelee is partly based on Fritz Leiber's Lankhmar, partly on Terry Pratchett's Ankh-Morpork, and partly on Port Blacksand in the Fighting Fantasy series.

Q. Do you have any new works in the pipeline?
I'm working on a verse version of A Princess of Mars. This is a science fiction adventure story, now in the public domain, written by Edgar Rice Burroughs, who's more famous for Tarzan. Disney is also doing a movie of it, called John Carter, but that's not why I chose it. I generally work on several things at the same time, so I'm also in the middle of a few short stories and poems.

I've been encouraged to write a novel set in the fantasy city of Telelee, which is the setting of a few of the stories in The New Death and others. I have a lot of background for this world, because I blog every day and most of it is setting detail. I also have a half-finished novel called All-American Detectives, which is a combination of a detective story and a story about superheroes, which I'll probably come back to in the future.

Q: Who are your favorite authors?
I don't know if these are my only favourites, but they're the one that probably influenced The New Death and others the most. JRR Tolkien and Jack Vance for the elaborate dialogue. Robert E Howard for the general atmosphere. Terry Pratchett for the humour. and Lord Dunsany for the use of Fame, Time and so on as characters.

Q: Tell us something about yourself that not many people know.
I have three nipples (the third one is a lot smaller, and looks like a birthmark, but it isn't).

Lol! Thanks, James for telling us about yourself, your writing and your extra little friend there.

James' ebook collection The New Death and others is now available from Amazon and Smashwords.