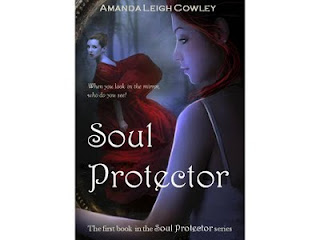 Soul Protector is a fast-paced fantasy romance. In part one of the Soul Protector series, Gracie discovers she can switch into other people's bodies.

Unaware she has a visible aura, she gets abducted by a monitor, Dan. He introduces Gracie to the world of Soul Protectors, but while she admires what they do, she isn't brave enough to embrace switching herself.
She falls for Dan, but finds he has hang-ups of his own. When Gracie does finally pluck up the courage to switch again, she uncovers a dark secret; one that shocks her to the core.
Hi Amanda! What will readers like about your book?
Soul Protector is a fantasy romance with twists and turns, so hopefully you will be hooked, but unable to predict the outcome.
What inspired you to write it?
I’ve always wanted to write a book, but when I tried in the past, I gave up after the first chapter. Then I had one of those days where everything was going wrong, and I was worried about a family member (illness – but they’re all better now). I just wanted to escape into someone else for the day and leave my worries behind – and that put the idea for Soul Protector in my head. The idea just grew and grew, and I couldn’t type fast enough…
Do you have any new works in the pipeline?
Yes. Part two in the Soul Protector series is my work in progress. I hope to have it available in digital format and paperback by the end of this year.

Who are your favourite authors?
I like Kelley Armstrong, Richelle Meade, Stephenie Meyer, Kazuo Ishiguro and Marian Keyes.

Tell us something about yourself that not many people know.
I have the world’s worst sense of smell. It’s shocking. I was on plane once, and when I came out of the toilet, the air hostess sprayed me with air freshener. I was a little put out to say the least – but my husband told me the gentleman who came out before me had left a really bad smell, and the air hostess ran off to get the freshener; no once could believe I’d wandered in, (oblivious), while they were all gagging.
Amanda Leigh Cowley lives in Northampton, UK, with her husband, two sons and a shaggy dog. In addition to helping her husband with the admin side of his business, ferrying the kids between football (soccer!) matches, and writing articles online, she has managed to fulfil a burning ambition to write a book. Soul Protector is her debut novel.
You can find out more by checking out Amanda's blog: http://amandaleighcowley.blogspot.com
Soul Protector is available to buy from Amazon and Smashwords
Posted by Shalini Boland at 12:50 2 comments: