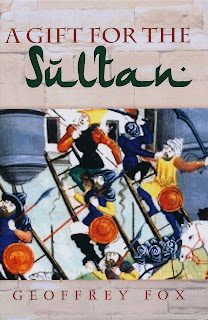 A Healthy Dose of Satire

Lisa Scullard has been writing novels since the age of 18, and has managed to scrape by otherwise without any relationships or permanent career. She has one daughter from a holiday she can't really remember properly, and her main job so far was nightclub bouncer full-time for seven years. 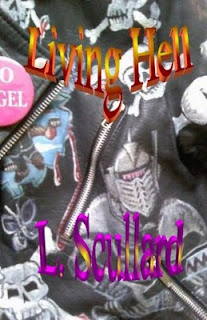 Hi Lisa! Can you tell us about your first novel, Living Hell.

Set in the fictional small suburban town of Jericho, in a world which took a religious wrong turn several hundred years ago and is currently mostly non-practising Satanist, a group of Youth Club volunteers try to organise a Halloween party. In between dealing with the local Press's fixation on an unresolved suicide, and day-to-day blackmail, 19-year-old Kim hooks up with Hellraisers frontman Alastair Brash - and all HIS problems. Which look like they're only just starting.
What do you think readers will like about the book?

It's about that post-adolescent stage in your life when school was pretty much over but nothing real has come along to replace it, and everything's awkward. Your parent's aren't part of your daily life anymore, so you find ways to get by on your own, and try not to be sucked into other people's gangs, groups or cult-type things.
I think a lot of people forget about how funny everything is at that age – there are no commitments, mortgages or 'lifestyle' to keep up with, and pretty much everything is spontaneous and weird.
Also it's a great mystery/action plot following the aftermath of a Halloween party, which takes place over only four days. I wanted to keep the story focused and create interesting characters that readers would want more stories about in future.
What inspired you to write it?
I wrote Living Hell when I was 18, aiming at my own age group - all there was to choose from when I was a teen was Judy Blume, Enid Blyton or Willard Price. Nothing was edgy or racy enough, and it was depressing. Gollancz and Pan MacMillan loved it, but wanted me to change the target audience to adult. Pan Mac asked me to write a sequel, but that only got to first draft stage before the editor handling it left. It was three years' waiting wasted, and I lost confidence for a long time after that.
I lived in a small village with boy racers and bikers amongst the locals, with nothing to do at weekends except pubs or the sports centre in a nearby town - not even a cinema within 30 miles, and the last bus anywhere was at 5.30pm. I also had Graves' Disease and was going back and forth to hospital appointments in London, and having various beta-blockers tested on me, none of which were working, and I couldn't get a job. My brothers and I read Pratchett, Tom Sharpe, watched sci-fi and comedy, and I wrote stories as escapism.
Do you have any new works in the pipeline?
I've also just published Death & The City in hardcover, paperback and eBook - a chick-lit backlash against traditional romance/crime stories. It's satire, dark, and due to get darker in follow-ups. It's about a female bouncer with a personality disorder who has to bump off contract killers identified through her usual job. Her head office set her up with a wingman, and she doesn't want to be manipulated or tied up in romantic cliches that other women would assume was part of the scenario. It's a bit postmodern in that sense.
I'm doing some illustrations at the moment, and writing a sequel to The Terrible Zombie Of Oz, as well as continuing the Death & The City "Tales Of The Deathrunners" series. I haven't got into the sales side of it, I don't want to - would rather just wait and see if readers like it without being pressurised into buying.
Who are your favourite authors?
Terry Pratchett and Tom Sharpe - for pure irreverence and style of humour. The laugh-out-loud even if you know you shouldn't sort.
Tell us something about yourself that not many people know.
While I was at school my only real ambition was to get married at 16, and have six children *fail* :) But at least I can say I've got further in writing fiction than I have in real life ambitions, even if I never sell many books :)
Lisa, you’re such a star. I already have two of your paperbacks on my bookshelf at home and you know I’m a big fan. It’s been a joy to have you here.
LIVING HELL was Lisa Scullard’s first completed novel, and is now available in both ebook and paperback on Amazon, Barnes & Noble, Smashwords (Nook/Sony), Createspace (paperback) and Lulu (hardcover/dustjacket).
You can stalk find more out about Lisa here:
http://www.screenkiss.co.uk/eStore.htm
http://voodoo-spice.blogspot.com
On Twitter
On Youtube
Posted by Shalini Boland at 08:58 No comments: