The Things A Boy Will Do To Get A Girl: Becoming Edward by Faye Meredith

Today I'm lucky enough to be joined by the fabulous Faye Meredith, author of Becoming Edward. I've read the novel and have to say I loved every second. At one point I was laughing so hard I couldn't breathe. Cute, funny and unashamedly British, this is a story I'd love to see on TV. It's genius! 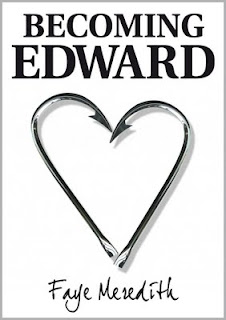 Both boys fail to win her until one of them has the bright idea of becoming Edward.

Becoming Edward is a light-hearted teen fiction novel for young adults who love paranormal romance, especially Twilight and Breaking Dawn. There are no vampires in it, but there is a boy who thinks he's Edward Cullen.

The author is a huge Twilight fan and explores what happens when obsession goes too far.
What will readers like about your book?
The lengths that boys will go to attract the girl of their dreams, even if it means dressing up like a fictional character and getting it completely wrong. Hopefully, it’s funny and insightful at the same time.
What inspired you to write it?
I was in Borders (which I sorely miss now it’s gone) and I saw a group of teenage girls sitting around the Twilight section, reading the books like their lives depended on it. I think Breaking Dawn had just come out and I guess they couldn’t afford to buy the hardback. A thought popped in my head: how would they react if someone who looked like Edward Cullen walked in? That’s where I got the idea for Becoming Edward.
Originally the boy was going to be the full package and be completely unaware that he looked like Edward Cullen. But then I thought it would be far more interesting to make him change into him. More importantly, what would make him want to do that? It had to be for a girl.
Do you have any new works in the pipeline?
Yes and no. I have far too many ideas. I’ve have about 4 books planned out but I can’t decide which one to write first.
Who are your favorite authors?
Gosh, so many. Here goes, in no particular order: Anne Rice, Suzanne Collins, Nick Hornby, Ian Banks, Stephenie Meyer, Ken Follet, George Macdonald Fraser, Philip Pullman, Roald Dahl, Terry Pratchet, CS Lewis, Eoin Colfer and Shalini Boland, of course.
Tell us something about yourself that not many people know.
At weekends I dress up in rubber (no, not that sort of thing you dirty lot!) and go surfing. I’ve been doing it quite a few years now and have surfed in Spain, Portugal, France, the Canaries and chilly old Cornwall.
Thanks so much, Faye!

If you like the sound of Becoming Edward, here's where you can get your mitts on a copy:
Amazon for Kindle
Barnes & Noble for the Nook
Smashwords
Posted by Shalini Boland at 13:03 2 comments: