Shawn Maravel was born in a small New Jersey town parked right smack dab in the middle of farm country. She has a twin sister and two kid sisters. When her husband joined the Army and was stationed in Germany she packed up her things and moved to Germany to be with him. Making the most of the Army life Shawn has traveled around Europe as much as possible and considers Germany home after spending the last two and a half years there. She spends most of her time reading, writing books, and spending time with her husband, faithful Rottweiler, and ninja cat. 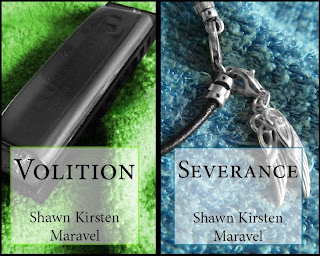 In the book Volition Joel seems to enter Charlotte's life at just the right time, or just the wrong time, depending on who you ask. His easy charm and good looks are assumed by her friends to be Charlotte's biggest distraction in seeing him for who he really is. But the question isn't who he is, it's what.

His bright green eyes match Charlotte's exactly; his hair is the same chocolate brown. Are these just a coincidence or is there a reason for their similarities? Are they connected somehow? Well...that would be absurd...wouldn't it? Charlotte doesn't even know Joel. He's charming and sweet and has the air of innocence, yet he seems to know maybe just a little too much.
There's a fine line between mysterious and dangerous. But where does Joel fall? And why won't he tell Charlotte anything more than that he's "here to protect her." Well that definitely clarifies nothing. Sure she had a close call at the club a few nights ago and things could have ended badly but they didn't...right? Well, that's when Charlotte met Joel and she did happen to meet him in a dark hotel room after she'd passed out at said club. Wait. Now everything is just beyond confusing.
Joel seems honest and something in Charlotte's gut says that he's telling the truth...but what exactly has he told her apart from nothing?
What will readers like about your books?
I think that readers will like my characters and find them very relatable. In book one, Volition the story is built up, the characters developed, the plot and suspense begin, but in book two the action, romance, and suspense really take off. And in book two you really get a feel for the characters even more, discovering what they are willing to do for love and in some cases, revenge.
What inspired you to write them?
The first story I wrote, With Eyes That See I wrote when my husband, then boyfriend, enlisted in the Army. It was something to focus my attention on. That story was inspired by my grandfather who was diagnosed with glaucoma when he was in his early twenties. I am actually re-writing it now. Volition and Severance were similar, I started writing Volition when my husband deployed to Iraq for a year. It started off as one book, inspired by a question that I had asked myself one day, “Who loves you more than anyone else, puts you first, loves you for all that you are and has known you your entire life, putting their love for you before all else.” I developed characters and a plot from there. And soon one book became two books!
Do you have any new works in the pipeline?
I actually have one book called The Wanderer that I will be releasing in January. It is a story about a recently retired Army Veteran. It was originally inspired by my love for a man in uniform and how fabulous I think they look riding a motorcycle in uniform. Seriously…I cannot get enough of it. The main character, Landon Bradley is the kind of man who is not used to sticking around for too long in one place. He packs up his motorcycle and heads North West in search of peace and maybe even a place to finally settle down. But what he finds in a small Wyoming town scares him.
Maxine Abrams, more affectionately known as Max makes him think that maybe he is the kind of man that can be loved, after so many years of thinking otherwise. In the end he must chose which call to heed, his heart or the open road. It really was a very fun story to write. It only took me two months actually. And I love Landon just as much as Max. I think that I created two very strong and believable characters, and a love story that will melt the hearts of my readers.
The story I am working on now, the re-write of With Eyes That See, is arguably my favorite, just because it is my first and re-writing it is something I kind of thought I had lost hope of ever doing. I mean, I wrote three books in between! You can read more about all of the books of course in greater detail on my blog.
Who are your favorite authors?
My favorite authors vary. I read mostly YA books and literary fiction. Those are the two genres that I write as well. For literary fiction I like Nicholas Sparks and Jodi Picoult, though I’ve only read one of Jodi Picoult’s books as of right now, Salem Falls which honestly blew me away. Very well written. And for young adult I like Stephenie Meyer the most, at this point in time. I’m not a crazy Twilight fan by any means but as a writer I envy her easy flow and her ability to write a story that is so fluid.
I didn’t read at all until I finished a book called The Wild Girl by Jim Fergus (I honestly read it just because I loved the cover so much) and it was really good though it was hard, as someone who didn’t read, to get through it. The next book I picked up was Twilight and by that point all four were already out and as someone who found reading difficult…I have never read a book so fast in my life, let alone four, even as someone who enjoys it now. In fact…I can thank those books in part for picking up writing again in the first place.
Tell us something about yourself that not many people know.
I don’t drink, at all. Not for any religious reason or family issues or anything like that. My twin sister and I just grew up very stubborn and just about anything that “everyone did” that was considered "cool", we rebelled against. So even to this day, at age 23 neither of us drink. Everyone I know personally knows this of course but it’s kind of a strange thing about me that always surprises people.
Thanks so much, Shawn!


You can find more information on Shawn and her writing in the following places:
Author Blogspot
Goodreads
Facebook
AmazonAuthor Page
Twitter
Posted by Shalini Boland at 09:57 1 comment:

This week I've been featured in The Dursley Gazette! Now that might not mean a lot to most of you, but it's SO exciting for me. It's the local paper where I grew up and I used to read it every week and scan for stories about anyone I knew - stories like 'Vandals Destroy Rugby Posts' and 'John Smith Wins Fruit Basket at The Dursley Carnival'

Dursley author to make it big with cult vampire novel

11:21am Wednesday 13th July 2011
By Claire Marshall
A FORMER Rednock student is on her way to making it big as an author with what looks set to become a cult hit vampire book.

Shalini Boland could be hot in the heels of Twilight author Stephenie Meyer, judging by the success of her new vampire novel, Hidden.

The book is selling well in the UK, but it is in the US where it is really taking off and the reason could be ...  Read more

Posted by Shalini Boland at 20:57 No comments:

Drew Cross is a thirty-year-old former model and ex-cop (sadly never a model cop!), now masquerading as a Financial Services professional, from Nottingham, England. He is married with two young children - The Zeds (Zac and Zara) - and a stroppy weimaraner called Charlie. When he's not reading, writing, toddler-wrangling or weimaraner-wrestling, Drew likes to practice martial arts, cook south-east Asian cuisine, and meditate. He hopes one day to break the habit of referring to himself in the third person. 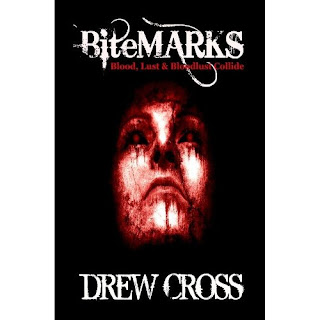 Blood, lust and bloodlust collide when the police hunt for a vampiric attacker threatens to shine an unwelcome spotlight onto the dark secrets of one that they call their own...

What will readers like about your book?
Despite the darkness of the subject matter, there is a good scattering of humour and playfulness throughout the book. Shane Marks is a memorable and complex character (which we'll continue to see as the other books in the series are released), and this is not a paint-by-numbers police procedural, there are several big surprises to keep you guessing. Please ignore the publisher blurb though, guys; this is not a 'vampire' novel, it's crime fiction and there are no supernatural characters involved.


What inspired you to write it?
When I left the police force a number of years ago I felt that I'd had an insight to the both job and to the city that I live in, that many people never get to know. I also had a ton of resentment and anger, so this seemed like a constructive way to channel those feelings!


Do you have any new works in the pipeline?
Loads! There's TrackMarks - the second book in the 'Marks' crime fiction series; a YA fantasy trilogy called 'The Scarmap'; a WIP YA novel called The Girl and Her Ghost, about a girl who upon choosing to end her life meets somebody who already has...I've also just released 'Under The Influence' a vicious and creepy horror short on Smashwords; and finally (for now), there's a satirical piece under construction too called 'Selling It', which can't decide whether it wants to be a script or a novel.


Who are your favorite authors?
Thomas Harris, John Connolly, Mary Shelley, Robert Louis Stevenson, Poppy Z Brite...probably a dozen others that will occur to me once I've sent this mail too!


Tell us something about yourself that not many people know.
I have a Mensa tested IQ of 155.

Thanks so much, Drew!

Bitemarks is available from Amazon and Smashwords
Posted by Shalini Boland at 10:36 No comments: