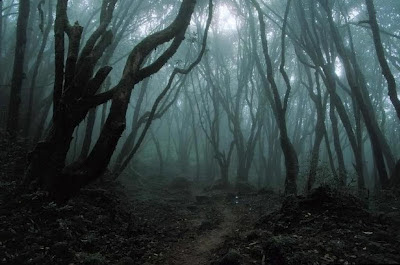 Johanna Frappier is one of those authors who makes me envious with her whip smart originality and fantastic storylines. Her latest novel Wood Spirit is, in my opinion, her best book yet. It's spooky, grizzly and hilarious with a cast of characters so real I'm sure she can't have made them up. This book had me pinned to its pages.

We're introduced to ghostbuster, Sebastian Park, and it's not love at first sight - he's a self-proclaimed womaniser and con-artist. But when he's called to a job in the too-good-to-be-true town of Peachtree, the place works some kind of magic on him, making him question who he is and what he's doing with his life.

If you like your comedy black and your horror left-of-centre, then this is most definitely the novel for you. I give Wood Spirit five black blood-dripping stars.

Author Mia Darien is up on the blog today, talking about her vampire novel Cameron's Law.

Vampires are people, too. Cameron's Law says so. Vampire and public face Sadie Stanton called Adelheid, CT home and it attracts a lot of attention. It attracts a lot more when vampires start attacking werewolves without provocation.

Can Sadie keep the community from descending into chaos and war before it brings all of to harm? And can she do it when she herself gets thrust into the spotlight?


What will readers like about your book?
Oh my, this is a tricky question, because I believe that every reader brings something different to and from a book. But... I've been told that I'm a fairly humorous writer, by anyone who enjoys a dry and often kind of sarcastic wit!

Otherwise, I try to take a spin on the vampires and werewolves genre that not everyone is doing, though I know I'm not the first to do it. I think people will enjoy seeing these mythical beings in "real life" as themselves. To read about their struggle to fit into a human world when they're not human. I like to think the struggle speaks to the... well... human condition. Or maybe Inhuman condition? Amidst other external trials and tribulations, in the form of mysteries and suspense and drama. All that fun stuff.

What inspired you to write it?
I actually started writing this series when I was a teenager, more than a decade ago. I set it aside for a while as life got so incredibly crazy but never forgot the stories and characters, so I turned back to them with a more mature eye and here we have the stories written, being written and will be written. What inspired it all, though, I'm not sure I could say. It was a long time ago! But the mythical has always fascinated me. I used to just thumb through the "Werewolf Encyclopedia" and be totally engrossed. I have no idea where it came from, but I run with it.

Who are your favorite authors?
These days? Let's see. P. N. Elrod has been a long time favorite. I count her Vampire Files series as a big inspiration for the writing I do now. Joe Abercrombie is a top five favorite these days. I’m in a new apoplectic fit waiting for his next book. "The Firebringer Trilogy" by Meredith Ann Pierce is one of my favorite books of all time. I love a lot of classics too, like Austen the Bronte sisters and so on. I like a lot of authors, so it's hard to narrow it down really.

Tell us something about yourself that not many people know.
I still watch "Sailor Moon" from time to time, but only the original, subtitled and uncut Japanese version! ('Cause that totally makes up for this little guilty pleasure.)

Mia Darien has lived in New England all of her life and knows that no matter where she goes from here, New England is always going to live in her. Presently, she still lives in the land of snow and fast talkers, with her husband, her son and her pets. She writes a bit of everything genre fiction (horror, romance, mystery, fantasy and science fiction) and thinks it sounds like an odd joke: a unicorn, a space monster, and a pair of zombie lovers walk into a murder investigation...