Collapse by Richard Stephenson
is free on Kindle until Sunday 14th April
Grab a copy while you can. 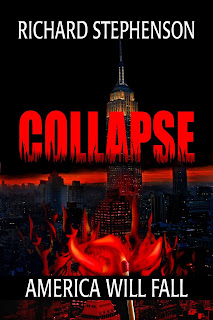 What would it take for the United States to fall from within? In a not too distant future, America is put to the test. With the American people deep in The Second Great Depression and two of the most powerful hurricanes on record to contend with, the United States is in no condition to deal with hidden terrorists on its soil, maniacal politicians, and the most formidable military threat the world has seen since the Third Reich.

This is the story of three men from three very different walks of life: Howard Beck, the world's richest man, also diagnosed with Asperger's Syndrome; Richard Dupree, ex-Navy SEAL turned escaped convict; and Maxwell Harris, a crippled, burned-out chief of police of a small Texas town. At first, they must overcome their own struggles and fight for their survival against impossible odds. In the end, the unlikely trio must band together to save their beloved country from COLLAPSE.