Ungentle Sleep, a ghost tale by B. Lloyd

A few years ago I had the good fortune to stumble across Greenwood Tree a wonderfully spooky novel written by B. Lloyd which was posted on the Harper Collins site, Authonomy. Now, B has finally published one of her stories: 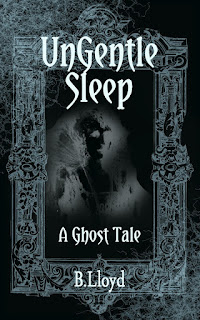 A crowded house party – with more guests on the way.
Despite instructions to the contrary, the older part of the house is opened up . . . and something is inadvertently let out, to wreak mild havoc and insanity on the Maydews
and their guests. That nasty incident involving Eleanor, followed by unpleasantness over Penny’s dress, and what is it Aubrey can hear, on the outer edge of his dreams?
Hysteria, missed cocktails, and something nasty in the attic.

Even the rats run away

A ghost tale, almost not quite long enough to qualify as a novelette,
created in celebration of M.R.James’s 150th anniversary.
~ ~ ~

You can get your paws on a copy here:
Amazon UK
Amazon US

About the author:
A Bustle attached to a keyboard, occasionally to be seen floating on a canal …

Her inky mess, both graphic and verbal, can be found in various regions of the Web and appendaged to good people’s works (for no visible reason that she can understand).

More here:
http://about.me/B.Lloyd
& here :
http://lloydanon.wordpress.com
For those who enjoy Twittery drop by @AuthorsAnon as she enjoys a chat (Warning: Please expect occasional bouts of nonsense).
Posted by Shalini Boland at 17:40 3 comments: