Today I’m thrilled to welcome Robert Craven to HOT NEW AUTHORS, a brand spanking new feature on my blog. I’ve been pestering him for weeks to let me know the release date for his fab new spy thriller, Get Lenin, and now here it is! Yay! 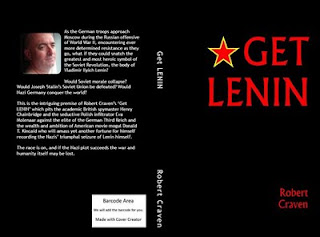 So Robert, what will readers like about Get Lenin?
What readers will get is adventure, espionage & both the horror & the glamour of the 1930's as the story unfolds into WW2 through the eyes of the main character Eva Molenaar.


What inspired you to write the novel?
I grew up loving the books of Alastair Maclean, Fredrick Forsyth, Jack Higgins and John Le Carre. I came across a book called 'Lenin's Embalmers' about 10yrs ago which told the story of Lenin's mausoleum shipping in its entirety to the Urals in the face of the German army advance. Then a bulb went off in my head that went 'what would happen if...'

Do you have any other favorite authors?
As well as those mentioned above I love Cormac MaCarthy, Arthur Miller, Robert Ludlum and Martin Cruz Smith. Irish authors Roddy Doyle, John McGahern, Frank O'Connor and Brendan Behan.
And are there any new works in the pipeline?

I have almost completed the sequel, but mindful of how Get Lenin does. I have pitched to Night Publishing a semi-autobiographical work called 'Vocals preferred, own transport essential'. I was a musician in Dublin in the late 1980's to the mid 1990's and would jot down incidents and stories along the way. It needs a lot of work and is more of a long-term project.
Finally, can you tell us something about yourself that not many people know.
I've a pathological hatred of mime artists.
I'm with you on that last point! Thanks so much for taking the time to chat to us and I'd like to wish you massive success with Get Lenin. It's a great read.